Now accepting invitations for online video talks and readings for bookstores and clubs for The Stone Girl.    CONTACT

“I was born because a man came to kill my father.”

William Friedrich, an ambitious professor of psychology at Yale in the early 1950s, has stumbled upon a drug that promises happiness—and that can make him a famous man. His is a humanitarian effort; an attempt to relieve Americans of suffering, and the early results are so promising that Friedrich stakes his future on it. But when his experiment goes awry and a research subject, a brilliant and troubled Yale student, commits murder, the consequences will haunt him and his family forever.

Pharmakon, which in Greek means both “poison” and “cure,” is an epic invocation of the quest for bliss, for live, for family and prosperity, and all of the betrayals that follow. Through the eyes of the youngest son, Zach, we follow the Friedrichs from the well-ordered suburban life of postwar America through the chaos and freedom of the counterculture into the drug-fueled, media crazed eighties and beyond. In William Friedrich, Wittenborn has defined the archetypal American patriarch: a miracle worker and source of strength to everyone except those he loves the most. Honest, insightful, and ruefully funny, Pharmakon captures formative moments of the twentieth century and the telling traits of an American family. It is also a layered, thoughtful search behind the veil of psychopharmacology as we know it today—a tale not only of the consequences of research, but the complex personalities, appetites, and struggles that created it.

“A rattling good tale . . . Wittenborn describes the mind of a cracked genius with great gusto and inventiveness . . . [Pharmakon’s] pleasures are many.”

”John Irving is a benevolent influence on Wittenborn’s work.”

“No one who has ever been part of a family can fail to feel pangs of recognition.”

“A fascinating portrait of a family living on the edge.”

“…sharply observed; a subtle and wise fable of our time.”

“Eerie, authentic, and always with heart, Pharakon is a slow-burning triumph.”

“An old-fashioned novel about a modern subject… Beneath all the pain there’s hope coursing through these pages, and in the end don’t be surprised if you find yourself moved to tears.” 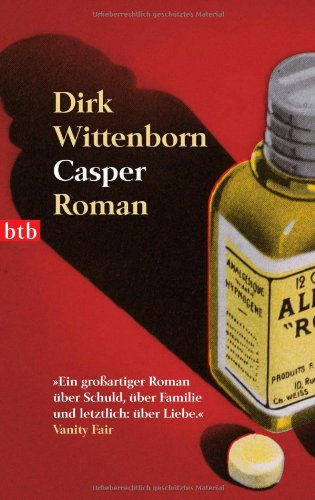 “In this novel, Dirk Wittenborn analyses Casper's story with high psychological sensitivity and sometimes oppressive intensity - a great novel about guilt, family and finally: about love.”

“It is Wittenborn's greatest novel with fascinating characters and a tragicomic ending.”

“A stylistic elegant book with a story that is both distracting and enchanting.”

“This book is abound with dry humour and is laconic, tragic and thrilling at the same time. One comes to realize that the discussions about methods of psychiatric therapies and about ethics in brain research are more than appropriate. Our conclusion: Absolutely marvelous!”

“Dirk Wittenborn’s new novel recounts the beginnings of hallucinogenic drugs, and thrillingly plays with the strong belief in progress at this time.”

“With a strong sense for pointed dialogues and the absurd, which reveals itself in normality, the author describes the sometimes bizarre world of psychology. And as every package insert gives instructions for side-effects, this novel does not only stimulate the brain cells but also keeps the reader grinning.”

“Casper by US author Dirk Wittenborn is superficially read a novel about depression, but in truth it dissects life's dreams. The best Wittenborn ever.”

“Without pathos but with much wit and love for his family Wittenborn tells a really wild story.”

“Wittenborn succeeds in giving a cunning description of the East-Coast America of the post-war period, when medicine saw in pharmacy the fraud promise of salvation. As his successful novel Fierce People, his new book Casper also is about the all-American leitmotif of the outsider, advancement, and ambition.”

“In PHARMAKON, Dirk Wittenborn has given us a fascinating portrait of a a family living on the edge in the barely post-medieval age of 1950s psychopharmacology. With both victims and perpetrators, pioneers and innocents, the saga of the Friedrichs will stay with you long after the book has been read.” — Richard Price“Wittenborn has given use a haunting illustration of the Tolstoyan maxim that every unhappy family is unique in its unhappiness, though in fact no one who has ever been part of a family can fill to feel pangs of recognition as they follow the saga of the Friedrich family across three tumultuous generations. PHARMAKON is an ambitious and memorable novel.” — Jay McInerney“A brilliant portrait of a young family of the 1950s, possessed of the particular qualities of postwar America—optimism, prosperity, and security—and the inevitable loss of innocence as both country and family encounter the challenges of maturity. Dirk Wittenborn’s provocative book is sharply observed; a subtle and wise fable of our time.” — Susanna Moore“An old-fashioned novel about a modern subject—set in the past but completely relevant to where we are today. It might remind you of mid-period John Irving, but gentler. And just when you’ve settled into a groove the book takes a surprising—sometimes shocking—turns. Beneath all the pain there’s hope coursing through these pages, and in the end don’t be surprised if you find yourself moved to tears.” — Bret Easton Ellis“Eerie, authentic, and always with heart, PHARMAKON is a slow-burning triumph.” — Marisha Pessl
Amazon Barnes & Noble Book-A-Million Apple Books IndieBound Google Play Kobo